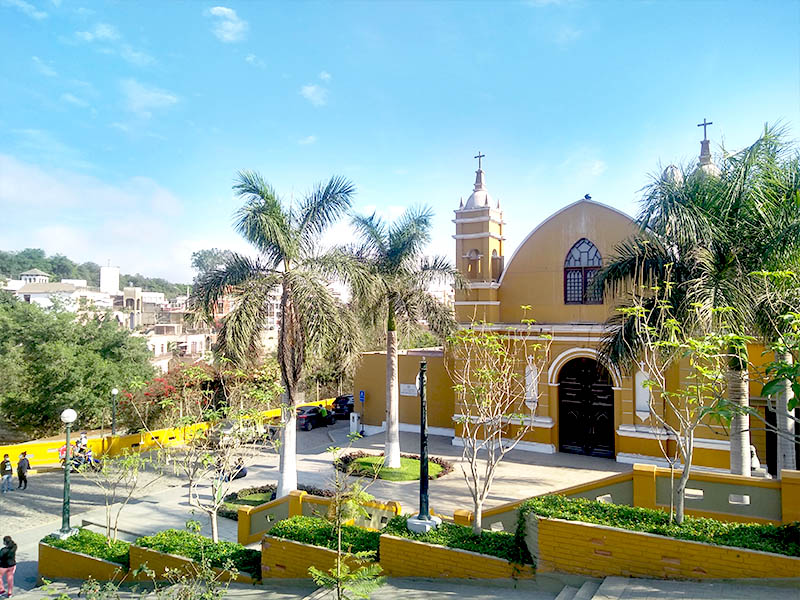 BARRANCO IS THE ARTISTIC, CULTURAL AND BOHEMIAN NEIGHBORHOOD OF LIMA

What was once the number one beach resort in Lima is now a neighborhood par excellence, preferred by artists and writers for its serenity and calm atmosphere. Catch a musical or cultural performance in one of the barrio’s plazas, stroll along the boulevard and stop in at one of the many bars.

Admire The Architecture Of Barranco

Its parks and republican-style mansions have regained past splendor over the years. The traditional and artistic alameda Saenz Peña is one of the district’s main attractions for its beautiful houses, including: the Valle Dasso house and the Embassy of Spain. The Rossel Rios house on Grau Av. is one of our architectural jewels as well. You will also admire other European style houses over San Martin Av.

Lima is the only capital city in the World that lies along the Pacific coast. Take advantage of Barranco’s beautiful boardwalk to watch the colorful sunsets Lima offers. Pack a small backpack of snacks and a blanket and you’re all ready for a sunset picnic.

Take a walk through Barranco’s whimsical main square. It is surrounded by colorful flowers, fountains, statues and charming colonial buildings (including a library). You can often see various theatre performances, live music, art displays and artisan fairs here over the weekend. This is where most of the action takes place in Barranco.

The bridge was built in 1876, in order to join the ends of the gorge. Although there is no water under the bridge, it still remains a favorite place for couples visiting the area and inspiration for artists, composers and writers. The Bajada de los Baños is a walkway that connects Barranco to the Pacific Ocean. It was originally used by fishermen who were coming down from Surco, to the beaches of Barranco. Cross the Puente de los Suspiros to the scenic pier overlooking the Pacific ocean.

Barranco’s main Catholic Church is located in the town square. The church functions regularly on Sundays, and has a few masses during the week. It is also a popular church for wedding ceremonies. Steps away from the Bridge of Sighs you will find La Ermita. This bright yellow church was originally a chapel used by fishermen and travellers. It was re-built in 1882 by Manuel de la Fuente Chavez, after it was burned down by the Chilean army during the war. The church is currently out of use, but it is rumoured to be undergoing renovations.

Small streets surrounded by old ranches built at the end of the 19th century, you will find murals and street art along the way. In the plaza the building of the San Francisco church stands out, a temple built thanks to the contribution of Don José Tiravanti, an Italian engineer who arrived to Peru in 1850 and was mayor of Barranco in 1887. He designed the church for the Franciscan congregation, for this reason the square is called Plaza San Francisco. Unfortunately, this building did not withstand the passage of time, modifications were made and the current church has modern lines without losing beauty and sobriety in its design.